From Helminthic Therapy wiki
Jump to navigation Jump to search 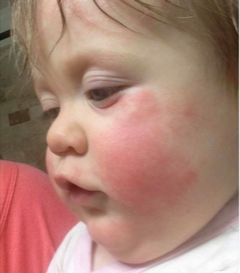 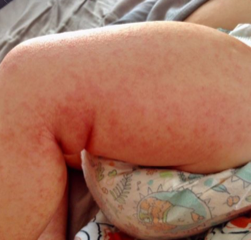 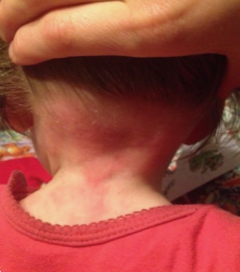 Eleanor was covered from head to toe with itchy, painful eczema when she received her first dose of 3 NA on April 20th, 2017. She was 16 months old.

I had feared I’d accidentally killed the worms by letting my daughter have one of my probiotics with digestive enzymes, but, in June. her skin cleared up. Then she came into contact with one of her many allergens, flared and didn’t seem to recover. I realised it was likely a waiting game for the NA to consistently benefit her immune system.

In August 2017, we dosed with 3 more NA, and she cleared by December. In January of 2018 she was given 5 more NA, and she more consistently developed clear skin about that time, 10 months in. While her dog allergy improved, she was still allergic to dairy, wheat, soy, egg, nuts, peanuts, sesame, flaxseed, coconut and nightshades.

Fast forward to June 2019, a little past 2 years after her first dose, and we discovered she was no longer allergic to eggs when a chicken egg broke in her hand and nothing happened. We tested small amounts in baked goods, and she was fine. Then we micro-dosed nuts, with the same result: she could eat them all. Then peanuts, flaxseed, and nightshades were all tested with positive results. Dairy, soy and coconut were still known allergens, but her reaction to coconut was not as severe. It just made her throat itchy if she had too much.

She can eat so many foods now that she couldn’t have before, and her skin is radiant. Her body is still sensitive, for example she will be the first to notice if there is mold present in a house or an old bath toy, and she’ll start to itch. Her allergy to dairy and soy is still scary, so she was given another dose of 7 NA in July 2019.

It is now January 2020. She still eats a diet free of dairy, soy, gluten and sesame, with a limited amount of coconut. She regularly eats cashew yogurt with a little coconut cream in it, but she can’t handle coconut milk ice cream yet and we won’t even try coconut oil, not only because of her allergy, but also to protect her helminths. We have also not introduced sesame, which was just as severe as dairy. I plan to have her IgE levels tested again before we try this.

We still prioritize her eating a mostly clean diet of vegetables, fruit, soaked/sprouted whole gluten-free grains and legumes, nuts/seeds, cashew yogurt, as well as some free range eggs and grass fed/free range/wild caught meat. It’s nice that she gets to have some cashew milk ice cream and a decently tasting cupcake/cake for her birthday and special occasions.

Health is a lifestyle and we practice it in all aspects of our life, not just diet. I am so grateful to NA for this life-changing healing, but it is in conjunction with supplements, herbal medicine, diet, clean water, reducing exposure to toxins, spending lots of time outside in nature, and all around mindfulness.

I had a dream once, when times were really hard. Eleanor’s eczema started at 4 months and her condition became more complex and difficult. She was so itchy and we weren’t sleeping. She would flare to so much food and everyone was afraid to help me with her. I had a dream she would be able to wear dresses with clear skin and run around healthy and happy. My dream came true. Miracles do happen. I am so grateful for mine.

Microorganisms that are believed to provide health benefits when consumed.

An intestinal worm which grows large enough to be seen with the naked eye when mature but which is microscopic when administered in helminthic therapy. Wikipedia:Helminths

The reintroduction to the digestive tract of a controlled number of specially domesticated, mutualistic helminths (intestinal worms) in the form of microscopic eggs or larvae to reconstitute a depleted biome to treat or prevent chronic inflammation, autoimmune disease and other immune-related disorders, including allergy.